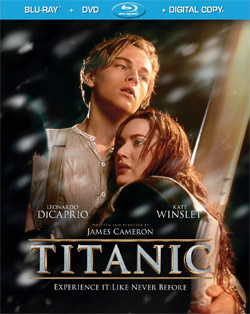 Paramount Home Entertainment has just announced details about the upcoming release of James Cameron‘s Titanic, scheduled to arrive on Blu-Ray Disc in September.

The movie will arrive in different combinations. The first one will be a 4-disc Blu-Ray/DVD combo, featuring the movie in high definition with a Commentary Track by director James Cameron, a Cast and Crew Commentary and a Historical Commentary by Don Lynch and Ken Marschall on one disc. The next two discs will contain the DVD version of the movie, while the fourth disc will be stacked with hours of bonus materials, such as the all-new Featurette “Reflections on Titanic” and the new multi-part Segment “Titanic: The Final Word with James Cameron,” which covers Deleted Scenes with commentary by James Cameron, Behind-the-Scenes Featurettes, Construction Timelapse, Deep Dive Presentation narrated by James Cameron, the Titanic Crew Video $200,000,001: A Ship‘s Odyssey, Videomatics, Visual Effects, the Celine Dion Music Video “My Heart Will Go On”, Trailers, TV Spots and Still Galleries.

You will also find countless other bonus materials on the disc which have been repurposed form the previous DVD release, such as Titanic Scriptment by James Cameron, Storyboard Sequences, Production Artwork, Photographs, Ken Marshall‘s Painting Gallery, Concept Posters and One Sheets, By the Numbers, Bibliography and a selection of Titanic Parodies, featuring MTV‘s 1998 Movie Awards skit,Â Â  Saturday Night Live skit and Titanic in 30 Seconds.

The movie will also become available in 4-disc Blu-Ray 3D package, which will include a high definition 3D presentation of the film over two discs, the standard Blu-Ray Disc and the disc with bonus materials. Note that this package will not include the DVD version of the movie.