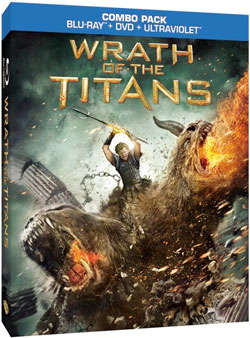 The struggle for power that inflames the Wrath of the Titans has been added to Warner Home Video‘s release schedule, as the studio brings the film to DVD and Blu-Ray Disc this summer.

A decade after his heroic defeat of the monstrous Kraken, Perseus (Worthington) the demigod son of Zeus (Neeson) is attempting to live a quieter life as a village fisherman and the sole parent to his 10-year old son, Helius.

Meanwhile, a struggle for supremacy rages between the gods and the Titans. Dangerously weakened by humanity’s lack of devotion, the gods are losing control of the imprisoned Titans and their ferocious leader, Kronos, father of the long-ruling brothers Zeus, Hades (Fiennes) and Poseidon (Danny Huston). The triumvirate had overthrown their powerful father long ago, leaving him to rot in the gloomy abyss of Tartarus, a dungeon that lies deep within the cavernous underworld.

Perseus cannot ignore his true calling when Hades, along with Zeus“ godly son, Ares (Edgar Ramrez), switch loyalties and make a deal, with Kronos to capture Zeus. The Titans” strength grows stronger as Zeus“ remaining godly powers are siphoned, and hell is unleashed on earth.

The DVD version of the movie arrives in anamorphic widescreen with dolby Digital 5.1 audio. The release also includes an Ultraviolet version of the movie, along with three Deleted Scenes, “Perseus Owes Helius an Explanation,” “Perseus Addresses the Troops” and ”Zeus is led past missing Olympians.”

The Blu-Ray version of the movie features a 1080p high definition transfer and a DTS 5.1 HD Master Audio track. In addition, the release contains the DVD version and an UltraViolet version of the film.

In addition, the Blu-Ray Disc contains two separate Maximum Movie Mode video commentaries, titled, “The Path of Men,” and “The Path of Gods.” The Featurettes that make up the Maximum Movie Mode are also accessible individually and include ”Battling the Chimera,” “Who Are The Titans?,” “Agenor: The Other Demi-God,” “The Cyclops Fight,” “Hephaestus: God of Fire,” “Prison of the Titans,” “Lost in Tartarus” Labyrinth,” “Minotaur: The Human Nightmare,” “Creatures of the Titans,” and ”The Heavens Raise Hell on Earth.”

A Blu-Ray 3D version is also scheduled for release, featuring the #D version of the film, the Blu-Ray Disc, the DVD and the Ultraviolet versions. The release contains all of the bonus materials found on the Blu-Ray Disc and DVD version.