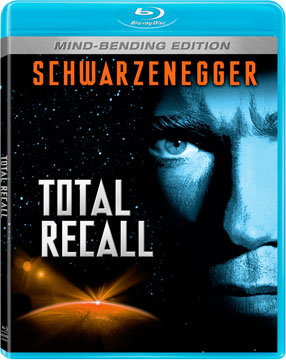 Just in time for the 2012 release of the theatrical remake, fans can experience the original sci-fi masterpiece like never before when Lionsgate Home Entertainment releases Total Recall: Mind-Bending Edition on Blu-ray Disc this July. Comprised of an all-new Director approved, high-definition transfer from the original film negative and including exclusive bonus materials, there‘s no better time to revisit this cult classic starring action legend Arnold Schwarzenegger.

Action star extraordinaire Arnold Schwarzenegger is perfectly cast as Quaid, a construction worker haunted by dreams of Mars in the year 2084. Against the wishes of his sexy wife (Sharon Stone), Quaid goes to Rekall, a company that implants artificial memories so he can “remember” visiting the red planet that is now being settled by human inhabitants. However, Quaid soon learns he is actually an amnesiac secret agent from Mars ”“ or is he?

Featuring a 1080p high definition transfer that is complemented by English, German and French 5.1 DTS HD Master Audio tracks, the release will also include a number of bonus materials, such as an all-new Interview with Director Paul Verhoeven.

Also included is the new Restoration Featurette, giving you a comparative look at the high-definition transfer from original film negative.

Further included on the release are Models and Skeletons: The Special Effects Of Total Recall, an Audio Commentary with Arnold Schwarzenegger and Paul Verhoeven, and Imagining Total Recall, a documentary featuring behind-the-scenes interviews with the film‘s stars and special effects specialists.

A “Making of” Featurette, a Photo Gallery and the movie‘s Trailer round out the release.

“Total Recall: Mind-Bending Edition” arrives with a bang on JulyÂ 31 with a super-low $14.99 sticker price!