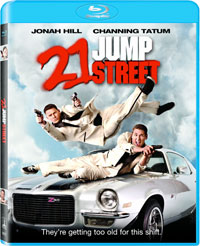 Sony Pictures Home Entertainment has added the brand new remake of 21 Jump Street to their line-up, scheduling this feature film for release on DVD and Blu-Ray Disc in June.

Former high school foes turned rookie cop partners can‘t catch a break ”“ until they‘re assigned to pose as students and bust a drug ring inside their old alma mater. Living like teenagers again, they slip back into their adolescent selves and risk the case ”“ and their friendship – with hysterically disastrous results! Jonah Hill, Channing Tatum and Ice Cube star in this outrageously hilarious action-comedy!

The DVD version will feature an anamorphic widescreen transfer with Dolby Digital 5.1 audio track. In addition, you will find a Commentary Track with the film‘s Director and Cast members on the disc, along with the Featurette ”Back to School”.

On Blu-Ray Disc, you will find a 1080p high definition transfer with high definition audio. The release will include the same Commentary Track and ”Back to School” Featurette, but will also add a Gag Reel to the mix, as well as a number of additional Featurettes, such as ”Not So Slim Shady,” “Cube-O-Rama,” “Brothers In Arms,” “Johnny Depp On Set,” “The Rob Riggle Show” and ”Peter Pan on The Freeway”.