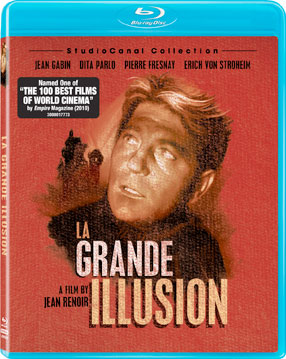 Lionsgate Home Entertainment has added the French movie classic La Grande Illusion, aka “The Great Illusion” for release on Blu-Ray Disc this summer.

During the thick of World War I, a German POW camp holds a group of French prisoners, including the aristocratic Boieldieu (Pierre Fresnay), MarÃ©chal the foreman (Jean Gabin) and the Jewish banker Rosenthal (Marcel Dalio). The trio prepares to make their escape, but is soon moved to a seemingly impenetrable fortress.

A masterpiece of French cinema, “La Grande Illusion” was directed by Academy AwardÂ® nominee Jean Renoir (Best Director, The Southerner, 1945) and was the first foreign language film ever nominated for the Best Picture OscarÂ® (1938). Named one of “The 100 Best Films in World Cinema” in 2010.

The Blu-Ray version of the movie will present the film in a brand new 1080p high definition transfer in its original 4:3 fullframe aspect ratio, complemented by French and German2.0 DTS-HD Master Audio tracks.