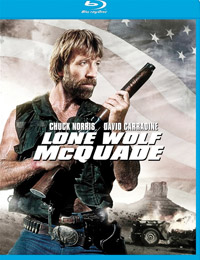 In Lone Wolf McQuade, legendary renegade Texas Ranger J.J. McQuade (Norris) is fierce with his gun – but lethal with his black belt! When his teenage daughter’s life is threatened by hijackers attempting to steal a truck full of weapons and ammunition, the job becomes personal for McQuade. Uncovering a colossal arms-struggling outfit that is selling guns and ammo to terrorists all over the world, McQuade come face to face with its kingpin, Rawley Wilkes (Carradine) – a world-renowned martial arts expert who has never lost a battle! Does the Ranger have what it takes to save his daughter and his honor – or has he finally met his match, and ultimately his demise?

In Code Of Silence, Eddie Cusack (Norris) is a Chicago detective who plays by his own rules – a dangerous habit, especially when he breaks the force’s “code of silence” to blow the lid off a deadly police cover-up. Now an outcast, he receives little help from his embittered fellow officers when he’s hurled into a blistering battle against rival drug kingpins. But Cusack is a one man army, waging war on the criminals with his razor-sharp wits, lightning-fast Karate moves and a special surprise: “Prowler,” a remote-controlled, rocket-equipped tank!

Neither disc will contain any bonus materials, but with a friendly $19.99 price tag, who would complain. “Lone Wolf McQuade” and “Code Of Silence” arrive in stores on July 7 for $19.99, each.