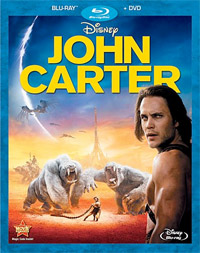 From Academy Award-winning filmmaker Andrew Stanton (Best Animated Film, Walle-E, 2008) comes John Carter — a sweeping action-adventure set on the mysterious and exotic planet of Barsoom (Mars). Based on Edgar Rice Burroughs’s classic novel, John Carter is a war-weary, former military captain who’s inexplicably transported to Mars and reluctantly becomes embroiled in an epic conflict. It’s a world on the brink of collapse, and Carter rediscovers his humanity when he realizes the survival of Barsoom and its people rests in his hands. Stunning special effects, great characters and villains — and complete with extraordinary bonus features — John Carter is a heroic and inspirational adventure that will thrill you beyond imagination.

The DVD version of the movie will feature an anamorphic widescreen transfer of the film, and supplement it with a Second Screen feature, Life by the Second: The Shanzam Unit, a selection of
Barsoom Bloopers and Deleted Scenes with Optional Commentary by Director Andrew Stanton.

The Blu-Ray version will include the same bonus materials, but feature a 1080p high definition transfer with DTS 7.1 HD Master Audio.

In addition, the studio will release a Blu-Ray/DVD combo, with all the same bonus materials, as well as a 4-disc 3D Blu-Ray/Blu-Ray/DVD combo, which contains an entire Blu-Ray disc dedicated to additional bonus materials, such as 360 Degrees of John Carter, allowing you to experience every aspect of the filmmaking process on one of the movie‘s biggest production days.

Also included on this releasee
is the Documentary 100 Years In The Making, giving you the chance to follow the journey of Edgar Rice Burroughs‘ story, from its origins as a pulp novel to its arrival onscreen.