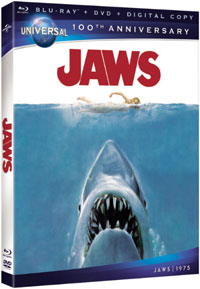 Universal Home Entertainment has added Jaws to their line-up, scheduling the eagerly awaited movie for release in high definition for the first time in August as part of the studio‘s 100th Anniversary celebration.

Directed by Academy AwardÂ® winner Steven Spielberg, “Jaws” set the standard for edge-of-your-seat suspense quickly becoming a cultural phenomenon and forever changing the movie industry. When the seaside community of Amity finds itself under attack by a dangerous great white shark, the town‘s chief of police (Roy Scheider), a young marine biologist (Richard Dreyfuss) and a grizzled shark hunter (Robert Shaw) embark on a desperate quest to destroy the beast before it strikes again. Featuring an unforgettable score that evokes pure terror, Jaws remains one of the most influential and gripping adventures in motion picture history.

Arriving as a Blu-Ray/DVD combo pack, the release will feature a 1080p high definition transfer of the film with a DTS 7.1 HD Master Audio track.

Stack with bonus materials, the release will also include The Making of Jaws and The Shark Is Still Working: The Impact & Legacy of Jaws. Further you will get to take a closer look at the restoration of the film for release in Jaws: The Restoration. Also included on the release are Deleted Scenes and Outtakes, as well as From the Set footage and Production Photos and Marketing Jaws. The Jaws Phenomenon will take a look at the impact the film has had, rounding out the release, together with the movie‘s Original Theatrical Trailer.

The release will also offer up the DVD version of the film, as well as a Digital Copy.