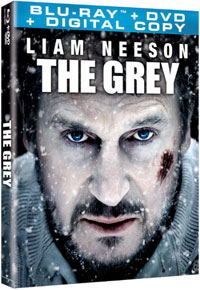 Universal Home Entertainment has added The Grey to their release schedule, making the film available on DVD and Blu-Ray Disc in May.

Liam Neeson stars as the unlikely hero Ottway in this undeniably suspenseful and powerful survival adventure. After their plane crashes into the remote Alaskan wilderness, a roughneck group of oil drillers is forced to find a way back to civilization. As Ottway leads the injured survivors through the brutal snow and ice, they are relentlessly tracked by a vicious pack of rogue wolves that will do anything to defend their territory.

Adrenaline-fueled, action-packed and loaded with some of the most intense and brutally realistic attack scenes ever filmed, this film will arrive in 1080p high definition on the Blu-Ray version, complete with a DTS 5.1 HD Master Audio track. The DVD version and a UltraViolet Digital Copy will also be included.

Sadly, it appears as if the release will not contain any extras.