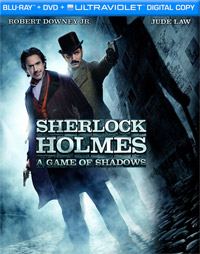 Warner Home Video has just unveiled details about the upcoming release of Sherlock Holmes: A Game of Shadows on DVD and Blu-Ray Disc in June.

Robert Downey Jr. reprises his role as the world’s most famous detective, Sherlock Holmes, and Jude Law returns as his friend and colleague, Dr. Watson, in “Sherlock Holmes: A Game of Shadows.”

Sherlock Holmes has always been the smartest man in the room”¦until now. There is a new criminal mastermind at large””Professor James Moriarty (Jared Harris)””and not only is he Holmes“ intellectual equal, but his capacity for evil, coupled with a complete lack of conscience, may give him an advantage over the renowned detective.

Around the globe, headlines break the news: a scandal takes down an Indian cotton tycoon; a Chinese opium trader dies of an apparent overdose; bombings in Strasbourg and Vienna; the death of an American steel magnate”¦ No one sees the connective thread between these seemingly random events””no one, that is, except the great Sherlock Holmes, who has discerned a deliberate web of death and destruction. At its center sits a singularly sinister spider: Moriarty.

Holmes” investigation into Moriarty’s plot becomes more dangerous as it leads him and Watson out of London to France, Germany and finally Switzerland. But the cunning Moriarty is always one step ahead, and moving perilously close to completing his ominous plan. If he succeeds, it will not only bring him immense wealth and power but alter the course of history.

The DVD version will feature Sherlock Holmes and Dr. Watson: A Perfect Chemistry, Moriarty’s Master Plan Unleashed and Holmesavision on Steroids, all three, featurettes about the making of the film. The release will also include an UltraViolet Digital Copy.

The Blu-Ray version is much more feature rich and comes packaged complete with a DVD version and an UltraViolet Digital Copy. Arriving in 1080p high definition with a DTS 7.1 HD Master Audio track, you will find Maximum Movie Mode: Inside the Mind
of Sherlock Holmes – Hosted by Robert Downey, Jr. on the release, giving you an in-depth look and analysis of the movie. Further, you will find Sherlock Holmes and Dr. Watson: A
Perfect Chemistry, Holmes Without Borders, Moriarty’s Master Plan Unleashed, Holmesavision on Steroids, Sherlock Holmes: Under the Gypsy Spell, Meet Mycroft Holmes and Guy Ritchie’s Well-Oiled Machine on the disc, offering additional glimpses at the production of the film.