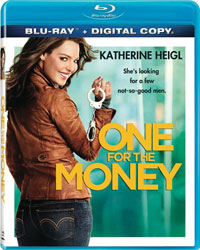 Lionsgate Home Entertainment has just announced the upcoming release of One For The Money, a movie adaptation of the beloved Stephanie Plum mysteries by Janet Evanovich. The film arrives in May on DVD and Blu-Ray Disc.

A proud, born-and-bred Jersey girl, Stephanie (Katherine Heigl) has plenty of attitude, even if she’s been out of work for the last six months and just lost her car to a debt collector. Desperate for some fast cash, she turns to her last resort: convincing her sleazy cousin to give her a job at his bail bonding company as a recovery agent.Â  The plot twists as Stephanie takes on the company’s most notorious bail-jumper – former vice cop and murder suspect Joe Morelli (Jason O’Mara) – the same Joe Morelli who happened to break her heart in high school. Nabbing Joe would be satisfying payback, and a hefty paycheck, but as Stephanie learns the ins and outs of the business from hunky colleague Ranger (Daniel Sunjata), she also realizes that the case against Joe isn’t airtight. With a plethora of misadventures along the way, Stephanie’s new job isn’t nearly as easy as she thought.

The release will include Featurettes, a GagReel and a Deleted Scenes. The Blu-Ray version will also arrive with a Digital Copy.