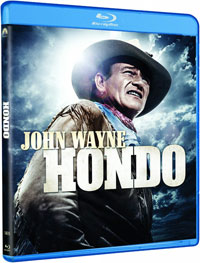 Paramount Home Entertainment has added the Western Hondo to their release line-up, bringing the film to Blu-Ray Disc for the first time in June.

Based on the Louis L’Amour story “The Gift of Cochise, ” this sparkling western starring John Wayne, features the actor as a half-Indian Cavalry scout who, with his feral dog companion, finds a young woman and her son living on a isolated ranch in unfriendly Apache country. A poetic and exciting script, outstanding performances, and breathtaking scenery make this an indisputable classic.

The release will feature a 1080p high definition transfer with a Dolby 5.1 TrueHD audio track. As extras you will find an Introduction by Leonard Maltin on the disc, as well as a Commentary Track by Leonard Maltin, Western historian Frank Thompson and actor Lee Aaker.

The Making of Hondo is also included on the disc, accompanied by Profile: James Edward Grant and The John Wayne Stock Company: Ward Bond. You will also find Wrap up with Leonard Maltin on the disc, along with From the Batjac Vaults, The Apache and a Photo Gallery.