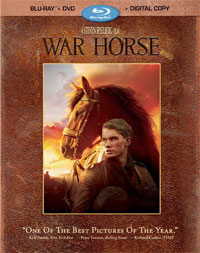 Buena Vista Home Entertainment has just announced plans to bring War Horse to DVD and Blu-Ray Disc in April in a variety of configurations.

From legendary director Steven Spielberg comes the epic adventure “War Horse, ” a tale of incredible loyalty, hope and tenacity. Based on the Tony award-winning Broadway play, and set against the sweeping canvas of World War I, this deeply heartfelt story begins with the remarkable friendship between a horse named Joey and his young trainer Albert. When they’re forced apart by war, we follow Joey’s extraordinary journey as he changes and inspires the lives of everyone he meets. Filled with spectacularly rich visuals ”” and complete with never-before-seen bonus ”” “War Horse” is a modern day masterpiece and one of the most powerful and moving stories of friendship ever told.

The DVD version will feature an anamorphic widescreen version of the movie with Dolby Digital 5.1 audio. The single-disc release will also contain the Featurette “War Horse: The Look,” in which director/Producer Steven Spielberg introduces us to his creative team of production designer Rick Carter, costume designer Joanna Johnston and director of photography Janusz Kaminski, who discuss what it took to design the look for the film.

A 2-disc Blu-Ray/DVD combo will also be available, featuring the movie in a high definition presentation. As extras, the release will include the Featurettes “War Horse: The Look” and “An Extra‘s Point of View,” in which film extra Martin Dew explains how and why he was brought in, along with a hundred other men, to be featured alternately as both German and British soldiers

Further, there will be a 4-disc Blu-Ray/DVD and Digital Copy Combo that will feature the movie and the aforementioned featurettes, along with a slew of additional bonus materials. Among those is A Filmmaking Journey, in which Academy AwardÂ®-winning Director/Producer Steven Spielberg provides a unique and unprecedented look into the making and filming of the movie. Editing & Scoring shows us how multi-Oscar winners Michael Kahn (film editor) and John Williams (composer) discuss specific aspects of editing the film and composing music for “War Horse,” as well as the secret to their long and successful collaborations with Steven Spielberg.

In The Sounds of “War Horse”, seven-time Academy AwardÂ®-winning sound designer Gary Rydstrom takes us through the sophisticated sound design he created for “War Horse,” while in Through The Producer‘s Lens we get to see Producer Kathleen Kennedy share the photos she took during filming and recount how she discovered the source material, as well as her appreciation of Steven Spielberg‘s vision, the team that soundsÂ  him, and why “War Horse” appealed to her.