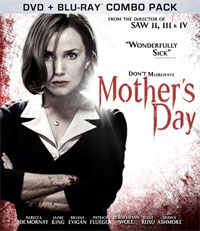 Anchor Bay Entertainment has just added the remake of Mother‘s Day to their release schedule, making the film available on DVD and Blu-Ray Disc in May.

In the tradition of “My Bloody Valentine” and “Orphan,” and from the maker of “Saw II, III and IV,” “Mother’s Day” is a graphic remake of the Troma horror classic. After a bank robbery gone wrong, three brothers go home to hideout – only to discover that their Mother (Rebecca De Mornay) lost their house in a foreclosure. The new owners and their party guests become the depraved brothers’ unwitting hostages. Their sadistic Mother soon arrives and brilliantly takes control of the situation, ratcheting up the terror. As the hostages struggle desperately to survive the harrowing torture, they realize that there is nothing a Mother won’t do to protect her children.

The DVD version offers an anamorphic widescreen transfer with Dolby Digital 5.1 audio. As a bonus, you will find a audio Commentary Track with director Darren Lynn Bousman and actor Shawn Ashmore on the disc.

The Blu-Ray version will feature a 1080p high definition transfer and will come with a Dolby 5.1 TrueHD audio track. You will also find the Commentary Track with director Darren Lynn Bousman and actor Shawn Ashmore on the disc as a bonus.