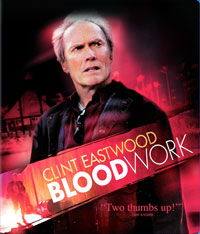 Warner Home Video has just added Clint Eastwood‘s 2002 thriller Blood Work to their roster, scheduling a high definition version of the movie for release in June.

FBI profiler Terry McCaleb (Clint Eastwood) almost always gets to the heart of a case. This time, that heart beats inside him. He’s a cardiac patient who received a murder victim’s heart. And the donor’s sister asks him to make good on his second chance by finding the killer. That’s just the first of many twists in a smart, gritty suspense thriller that’s vintage Eastwood and filled with plot twists.

The release will feature a 1080p high definition transfer with DTS 5.1 HD Master Audio track. Among the bonus materials on this disc you will find a Making-of Featurette, a Conversation In Spanish With Clint Eastwood, Wanda De Jesus And Paul Rodriguez (With English Subtitles) and the movie‘s Theatrical Trailer.