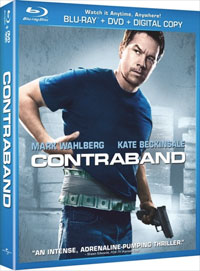 Universal Home Entertainment has just unveiled details about the upcoming release of Contraband, bringing the thriller to stores in April.

Mark Wahlberg stars as legendary smuggler Chris Farraday, who has left his criminal past behind to be with his wife (Kate Beckinsale) and sons. Â When a ruthless drug kingpin (Giovanni Ribisi) threatens his family, Farraday must summon his old skills and contacts for one last run. Contraband takes you to the cutthroat underground world of international smuggling, and on a thrilling, gritty adventure.

The DVD version will feature an anamorphic widescreen transfer of the movie with Dolby Digital 5.1 audio. Among the extras you will find a Commentary Track by Director/Producer Baltasar KormÃ¡kur and Producer Evan Hayes, as well as a selection of Deleted Scenes. The Featurettes ”Under The Radar ”“ The Making of Contraband” and ”Reality Factor ”“ The Stunts and Action of Contraband” will also be included.

The Blu-Ray version features a 1080p high definition transfer with DTS 5.1 Master Audio. You will find the same extras on this release as on the DVD version, but in addition, the Blu-Ray version comes with a Picture-in-Picture Video Commentary, featuring pre-visualization and storyboard comparisons of some the film‘s most exciting scenes. pocketBlu and a Video Timeline will also be included, a feature through which easily bring up the video timeline, allowing you to instantly access any point in the film. an UltraViolet digital Copy is also included in the release.