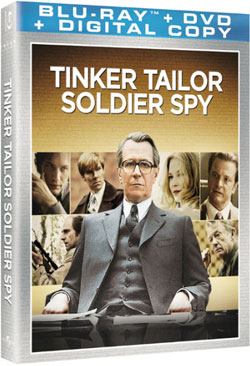 Gary Oldman leads a stunning all-star cast in this masterful adaptation of John le CarrÃ©‘s bestselling novel that redefined the spy thriller. At the height of the Cold War, a precarious operation goes deadly wrong, and the head of British Intelligence wonders if a double agent is leaking vital secrets. Brought out of retirement to expose the potential mole, master spy George Smiley (Gary Oldman) is the only one who can be trusted to expose one of their own. Or can he?

As the emotional and physical tolls mount on the high-ranking suspects, Smiley will be forced into the ultimate international spy game where everyone‘s motives are in question.

The DVD version features an anamorphic widescreen transfer of the movie with Dolby Digital 5.1 audio. A Commentary Track with Director Tomas Alfredson and Actor Gary Oldman will be included on this disc, along with a First Look Featurette.

On Blu-Ray Disc, the movie will be presented in a 1080p high definition transfer with DTS 5.1 HD Master Audio. The same Commentary Track with Director Tomas Alfredson and Actor Gary Oldman will be included, as well as the First Look Featurette. In addition, this version will also contain a selection of Interviews and a Digital Copy of the movie.