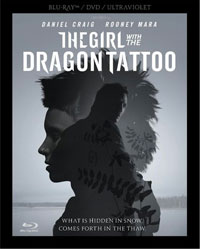 Sony Pictures Home Entertainment has added the remake of the thriller The Girl With The Dragon Tattoo for release on DVD and Blu-Ray Disc in March.

Disgraced journalist Mikael Blomkvist (Daniel Craig) accepts an invitation to surreptitiously investigate a forty year old unsolved murder on behalf of the victim’s uncle, Swedish industrialist Henrik Vanger (Christopher Plummer). Meanwhile, tattooed hacker Lisbeth Salander (Rooney Mara), hired to investigate Blomkvist, discovers the truth behind the conspiracy that led to his fall from grace. Thrown together by fate, the unlikely duo uncovers a secret history of murder and sexual abuse festering beneath the veneer of Sweden’s industrial past, all the while drawing closer to a quiet evil waiting to engulf them both.

The DVD version will feature an anamorphic widescreen version of the movie with Dolby Digital 5.1 audio. As the only extra you will find a Commentary Track by Director David Fincher on the disc.

The Blu-Ray version features a 1080p high definition transfer with DTS 5.1 HD Master Audio and arrives as a 3-disc combo featuring the high definition version, the DVD and a Digital Copy.

Packed with bonus materials, the release will include a
Commentary Track by Director David Fincher and a Multi-part Featurette called Vanger Archives that covers things such as Locations, Characters, Post-Production and the movie‘s Promotion. Highlights among these featurettes is a multi-angle look at the movie‘s Main Titles and a Visual eFfects montage with commentary by Tim Miller of Blur Studio.