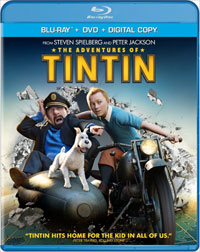 Paramount Home Entertainment has just announced the animated action adventure The Adventures of Tintin to arrive on DVD, Blu-Ray and Blu-Ray 3D in March.

The unquenchably curious young reporter Tintin (Jamie Bell) and his fiercely loyal dog Snowy as they discover a model ship carrying an explosive secret. Drawn into a centuries-old mystery, Tintin finds himself in the sightlines of Ivan Ivanovitch Sakharine (Daniel Craig), a diabolical villain who believes Tintin has stolen a priceless treasure tied to dastardly pirate named Red Rackham. But with the help of his dog Snowy, the salty, cantankerous Captain Haddock (Andy Serkis) and the bumbling detectives Thompson & Thomson, Tintin will travel half the world, outwitting and outrunning his enemies in a breathless chase to find the final resting place of The Unicorn, a shipwreck that may hold the key to vast fortune… and an ancient curse.

The DVD version will feature an anamorphic widescreen version of the movie with Dolby Digital 5.1 audio. The only extra on the disc will be the Featurette ”The Journey of Tintin and Snowy: From Beginning to End.”

This version will also include the DVD in addition to the high definition version.

The Blu-Ray 3D version will include everything mentioned above, but in addition, it will include a Blu-Ray Disc, containing a 3D version of the movie alongside the standard Blu-Ray and DVD versions.