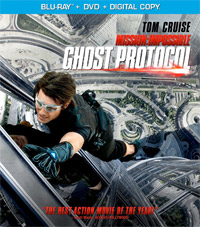 Paramount Home Entertainment has added the action thriller Mission: Impossible – Ghost Protocol to their line-up, scheduling the movie to be released on DVD and Blu-Ray Disc in April.

Blamed for the terrorist bombing of the Kremlin, IMF operative Ethan Hunt (Tom Cruise) is disavowed along with the rest of the agency when the President initiates “Ghost Protocol.”Â  Left without any resources or backup, Ethan must find a way to clear his agency‘s name and prevent another attack. To complicate matters further, Ethan is forced to embark on this mission with a team of fellow IMF fugitives whose personal motives he does not fully know.

The release will be available as a single disc DVD featuring the movie in anamorphic widescreen with Dolby Digital 5.1 audio. A selection of Deleted Scenes with commentary by director Brad Bird will be included on the disc, as well as the Featurettes ”The Sandstorm” and “Props”.

The movie will also arrive as a Blu-Ray Disc/DVD combo, featuring the movie in a 1080p high definition presentation with Dolby 7.1 TrueHD Master Audio. This version will include the same extras as the DVD version, but will further include an Alternate Opening as well as two more Featurettes, covering ”Heating Up In Dubai” and ”Vancouver Fisticuffs”.

A 3-disc Blu-Ray/DVD Limited Edition will also be available. Featuring the same materials as the 2-disc combo, the release will include a whole number of additional Featurettes, all presented on a dedicated disc.