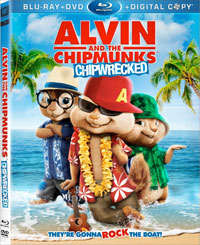 20th Century Fox Home Entertainment has added Alvin and the Chipmunks: Chipwrecked to their release schedule, bringing the film to DVD and Blu-Ray Disc in March.

The Chipmunks, Chipettes and their caretaker Dave Seville (Jason Lee) embark on a trip of a lifetime aboard the Carnival Dream cruise ship. Seeking fun and excitement, the Chipmunks turn the luxury cruise liner into their own personal playground. But the ultimate vacation quickly becomes a disaster when the Chipmunks, Dave and Carnival Cruise pelican mascot, who turns out to be the chipmunks‘ old manager, Ian Hawke (David Cross), accidentally fall overboard and find themselves ”˜Chipwrecked‘ on a remote island. Stuck in an unfamiliar territory, the six furry castaways are separated from Dave and must figure out a way to survive on their own for the first time in their lives.

The DVD version of the movie will include the Featurette ”Munking Movies in Paradise” as well as the Munk Music & Dance Machine, featuring songs, such as Vacation, Trouble, Whip My Hair, Party Rock Anthem, We Speak No Americano / Conga, Kumbaya, Survivor, Real Wild Child, Bad Romance, Hello, Say Hey, S.O.S, Vacation (Reprise), Born This Way / Ain‘t No Stoppin‘ Us Now / Firework, Party Rock Anthem (Reprise) and We Have Arrived.

The Blu-Ray version comes as a combo, featuring the 1080p high definition version of the film, along with the DVD version and a Digital Copy.

In terms of features, the release will include the same supplements form the DVD version, including the Munk Music & Dance Machine, and the Munking Movies Featurette. In addition, there will be more Featurettes, such as ”Going Overboard with The Chipmunks,” “Everybody Munk Now!” and ”Alan Tudyk, Chipmunk Appearance”, alogn wit hthe Fox Music Channel presents Featurettes “Growing up Alvin” and ”In Character with Jason Lee”.

A selection of Extended Scenes and the Sing Along Music Videos for ”Vacation,” “Survivor” and ”Bad Romance” are also included. The release will be rounded out by Promotional Fun Featurettes and an Chipwrecked: Coloring with Chipmunks App.