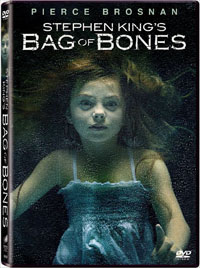 Sony Pictures Home Entertainment has added the TV mini-series Bag of Bones to their line-up, releasing it on DVD in March.

Based on a story by Stephen King, and directed by Mick Garris, “Bag of Bones” finds bestselling novelist Mike Noonan, unable to cope after his wife’s sudden death, as he returns to the couple’s lakeside retreat in Maine, where he becomes involved in a custody battle between a young widow and her child’s enormously wealthy grandfather. Mike inexplicably receives mysterious ghostly visitations, escalating nightmares and the realization that his late wife still has something to tell him.

The release will feature an anamorphic widescreen transfer with Dolby Digital audio. As extras you will find Voicemail from Sid and I Miss You Jo on the disc.

“Bag of Bones” arrives on March 13 for $26.99. Interestingly, no high definition version has been announced at this time.