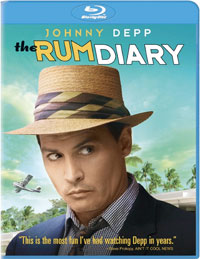 Johnny Depp is revisiting Hunter S. Thompson’s body of work in The Rum Diary, a movie based on the novel by Hunter S. Thompson, which will find its way to DVD and Blu-Ray Disc in February through Sony Pictures Home Entertainment.

“The Rum Diary” follows itinerant journalist Paul Kemp (Johnny Depp) on an alcohol-fueled journey across the pristine island of Puerto Rico. Adopting the rum-soaked life of the island, Paul soon becomes obsessed with Chenault (Amber Heard) the wildly attractive fiancée of Sanderson (Aaron Eckhart), an American businessman involved in shady development deals. When Kemp is recruited by Sanderson to write favorably about his latest unsavory scheme, the journalist is presented with a choice: to use his words for the corrupt businessman’s financial benefit or use them to take him down.

The DVD version will feature the movie along with the Featurettes ”A Voice Made of Ink and Rage: Inside The Rum Diary” and ”The Rum Diary Back-Story”.

The Blu-Ray Disc version will present the movie in high definition and will include the same bonus materials.