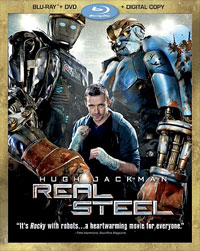 Balancing gritty action and emotional heart, “Real Steel” is an inspiring and visually stunning film that takes audiences on an action-packed journey. Washed-up boxer Charlie Kenton (Hugh Jackman) scrapes by as a small-time robot-fight promoter as he tries to make a comeback. Against all odds he eventually succeeds—at least in the eyes of his son Max (Dakota Goyo). “Real Steel” is spectacular family entertainment that will have everyone cheering again and again.

The DVD version will feature an anamorphic widescreen transfer of the film with Dolby Digital 5.1 audio, along with the Featurettes ” Making of Metal Valley” and ”Building the Bots”. Bloopers will also be included on the disc.

The Blu-Ray version comes as a Blu-Ray/DVD combo that offers the film in 1080p high definition with DTS 5.1 HD Master Audio. It will also include the Featurettes ” Making of Metal Valley” and ”Building the Bots” and the Bloopers found on the DVD version, but will further arrive with Deleted and Extended Scenes, and additional Featurettes ”Countdown to the Fight—The Charlie Kenton Story” and ”Sugar Ray Leonard: Cornerman’s Champ”. In addition, the release will contain a Real Steel Second Screen feature, giving you access to bonus materials on your iPad while watching the film, to peel back layers of effects with progression reels, check out 360-degree turnarounds of the robots, explore seamless branching pods that delve into the cutting-edge technology used to create the fights, and much more.