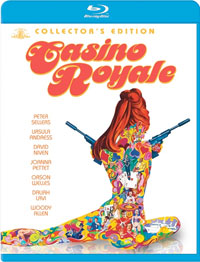 MGM Home Entertainment has added a series of titles from their catalog for release in high definition in February.

The list of releases, containing films from versions decades of the studio’s library, will offer Blu-Ray Disc versions at a very attractive price, though mostly devoid of bonus materials.

Among the films to make their debut are the James Bond parody, Casino Royale along with films such as A Fish Called Wanda, It’s A Mad, Mad, Mad, Mad World and Throw Momma From The Train. In addition, the studio re-promotes Get shorty at a new, low price point also. Acute observers have, of course, noticed that all of these films to be released are comedies.

All of these Blu-Ray movies will appear on store shelves on January 7 with a $19.99 sticker price.