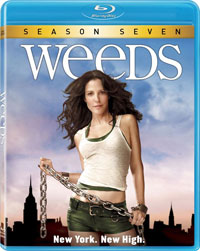 Lionsgate Home Entertainment has added Weeds: Season Seven to their line-up, releasing the TV series on DVD and Blu-Ray Disc in February.

Picking up three years after Nancy (Mary-Louise Parker) takes the rap for murder, the Botwins are heading to New York – and Nancy to a halfway house. The new season, which premiered to nearly six million viewers in June 2011, features special guest stars Martin Short and the return of Jennifer Jason Leigh as Nancy’s sister.

The release is complete with Cast and Crew Commentaries, an “Uncle Andy’s Tricks of the Trade” Mockumentary, a “Growing Up in the Weeds” Featurette with Alexander Gould, a Q&A with the creator and actors, a Gag Reel and Deleted Scenes.