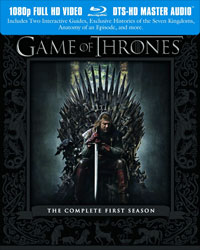 HBO Home Entertainment has just added Game Of Thrones to their release line-up, scheduling a DVD and Blu-Ray version of the acclaimed TV fantasy series’ first season in March.

In a land where summers span decades and winters can last a lifetime, trouble is brewing. From the scheming south and the savage eastern lands, to the frozen north and the ancient Wall that protects the realm from the darkness beyond, powerful families are engaged in a deadly cat-and-mouse game for control of the Seven Kingdoms of Westeros. As betrayal, lust, intrigue and supernatural forces shake the four corners of the Kingdoms, their bloody struggle for the Iron Throne will have unforeseen and far-reaching consequences. Winter is coming. Let the Game Of Thrones begin.

The DVD version will feature an anamorphic widescreen presentation of the show with Dolby Digital 5.1 audio. The release will be packed with bonus materials, including a number of Featurettes, covering the making of the series, as well as the creation of the opening titles, the characters, interviews with author George R.R. Martin and the show’s producers as they discuss the challenges they faced when bringing the epic novel to the small screen, and many more.

On the Blu-Ray version you can expect a 1080p high definition transfer with DTS 5.1 HD Master Audio, along with all of the above bonus materials.
In addition, the Blu-Ray version will also contain an Interactive Guide to Westeros, detailed Picture-in-picture Episode Guides and Exclusive Histories of the Seven Kingdoms.