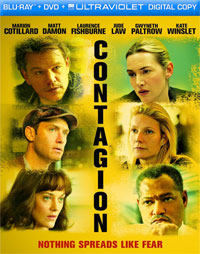 Warner Home Video has just added Contagion to their release line-up, scheduling the film for DVD and Blu-Ray Disc in January.

Matt Damon, Gwyneth Paltrow, Jude Law, Laurence Fishburne and Bryan Cranston, along with medical journalist Sanjay Gupta, explore the real science of global viruses and what they mean to the human race. The world is preparing for the next biological disaster… but is it too late

On DVD you will find a widescreen version of the movie with Dolby Digital 5.1 audio. In addition, the Featurette ”Contagion: How A Virus Changes The World” will be included, along with a UltraViolet Digital Copy.

On Blu-Ray, you will find a 1080p high definition version of the film with a DTS 5.1 HD Master Audio track. As bonus materials, the release features the Featurettes ”Contagion: How A Virus Changes The World,” “The Reality of Contagion” and “The Contagion Detectives”.

The film’s DVD version and an UltraViolet Digital Copy are also included on the release.