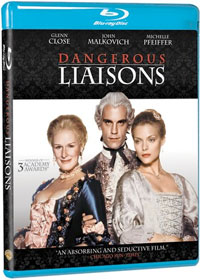 The game of conquest is underway. Anything goes when a predatory, wealthy widow (Glenn Close) challenges a notorious rake (John Malkovich) to seduce a beautiful young newlywed (Michelle Pfeifer). But this time, a cardinal rule will be broken: two players will fall in love-with tragic results.

The release will feature a 1080p high definition transfer with a DTS 5.1 HD Master Audio track. It will also feature a Commentary Track by director Stephen Frears and writer Christopher Hampton.