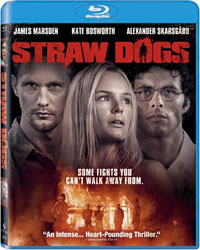 Sony Pictures Home Entertainment has just added the remake of Straw Dogs to their roster, bringing the intense film to DVD and Blu-Ray Disc in December.

A young couple (James Marsden and Kate Bosworth) moves to a quaint southern town. Soon their perfect getaway turns out to become a living hell when dark secrets and lethal passions spiral out of control. Trapped by a pack of depraved locals led by a ruthless predator (Alexander Skarsgard, TV’s “True Blood”), they face a night of agonizing suffering and endless bloodshed. Now their only hope for survival is to become more savage than their merciless torturers. Also starring two-time Academy Award® Nominee James Woods (Best Actor, Salvador, 1986 and Best Supporting Actor, Ghosts of Mississippi, 1996).

OnDVD you will find a widescreen presentation of the movie with Dolby Digital 5.1 audio, along with a Commentary Track by Writer/Director Rod Lurie. Also included on the disc are the featurettes Courting Controversy: Remaking a Classic, The Dynamics of Power: The Ensemble, Inside the Siege: The Ultimate Showdown and Creating the Sumner House: The Production Design.

The Blu-Ray version features a 1080p high definition transfer with a DTS 5.1 HD Master Audio track. It will include the same bonus materials as the DVD version.