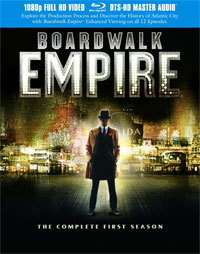 HBO Home Entertainment is bringing the first season of the acclaimed TV series Boardwalk Empire to DVD and Blu-Ray Disc in January.

From Terence Winter, Emmy® Award-winning writer of The Sopranos, and Academy® Award-winning director Martin Scorsese, “Boardwalk Empire” is a lavish period drama set in Atlantic City, following the life and times of Nucky Thompson (Steve Buscemi) – the undisputed political and criminal mastermind whose grip on power and control of the city’s liquor supply is under constant threat.

Also included is Making Boardwalk Empire, a featurette that lets you step onto the sets of Boardwalk Empire in this special behind-the-scenes look featuring interviews from the cast and crew.

Character Dossier gives you a look at the development of the major players in the series, with this evolving, comprehensive character guide. The featurette Creating the Boardwalk shows you how the amazing 300-foot Boardwalk set was created to bring Prohibition-era Atlantic City to life.

In Atlantic City: The Original Sin City you can explore the culture and climate of Atlantic City during the roaring ’20s in this 30-minute documentary, while the Speakeasy Tour gives you an insider’s tour of some of the famed Prohibition speakeasies in Chicago and New York with cast members from the series.

On the Blu-Ray version you will also find an Enhanced Viewing Mode, in which you can learn more about the production process from the cast and crew and discover the real-life history that inspired the show from noted Atlantic City historians in this interactive, picture-in-picture experience on all 12 episodes.