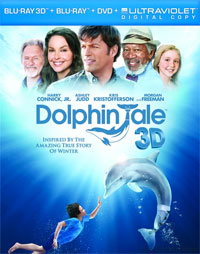 Warner Home Video has added Dolphin Tale to their schedule, bringing the family movie to DVD, Blu-Ray and Blu-Ray 3D just before Christmas.

In an inspiring story of the bond between animals and humans, a boy named Sawyer discovers an injured dolphin, who is brought to a marine hospital and named Winter. Unfortunately, her injuries cost Winter her tail, without which she may not survive. But with Sawyer’s devotion, a marine biologist’s (Harry Connick Jr.) and the brilliance of a prosthetist (Morgan Freeman) charged with creating a new tail, Winter may receive a second chance at life.

On the DVD version you will find a widescreen presentation of the film with Dolby Digital 5.1 audio. In addition, the release will feature a series of Deleted Scenes and a Gag Reel. Ormie and the Cookie Jar will also be included, along with an UltraViolet Digital Copy of the movie.

The Blu-Ray version will come on two discs, featuring a high definition presentation with DTS HD 5.1 Master Audio, alogn with the DVD version and the UltraViolet Digital Copy.

All the extras from the DVD will be included in this version, but in addition, you will also find the featurettes The Hutash Rainbow Bridge on the disc, At Home with Winter, Dolphin Tale: Spotlight on a Scene and Winter’s Inspiration.

The Blu-Ray 3D version will contain a third disc with the 3D presentation of the film in addition to all the contents and discs found in the Blu-Ray version.