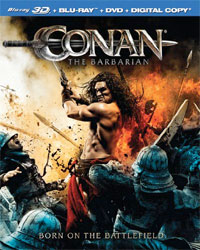 Lionsgate Home Entertainment has add the remake of Conan the Barbarian to their release line-up, scheduling the fantasy action film for a November release.

A quest that begins as a personal vendetta for the fierce Cimmerian warrior soon turns into an epic battle against hulking rivals, horrific monsters, and impossible odds, as Conan realizes he is the only hope of saving the great nations of Hyboria from an encroaching reign of supernatural evil.

Based on the character of Conan as originally created by Robert E. Howard, a boy born on the battlefield grows into a hulking warrior hell-bent on avenging his father’s death. But Conan’s personal vendetta soon escalates into an epic battle of impossible odds, facing the fiercest of rivals and the most horrific of monsters.