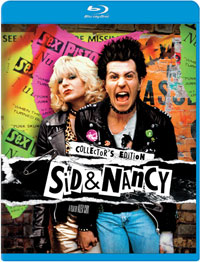 Gary Oldman and Chloe Webb “execute performances that are nothing short of phenomenal” (Los Angeles Times) as Sex Pistols bassist Sid Vicious and his unforgettable junkie girlfriend, two social misfits who literally love each other to death. In this “riveting biography of burnt-out icons” (The Washington Post), visionary writer/director Alex Cox (Repo Man) creates “a great film” (“Siskel & Ebert”) about the destructive lives of two 1970’s punk legends. Their love affair is one of pure devotion. Sid falls hard for groupie Nancy Spungen, who seduces him with her affection and addiction to heroin. Their inseparable bond to each other and their drugs eventually corrodes the band, sending Sid and Nancy down a dark road of despair. Out of money, hope and options, the despondent pair hit rock bottom while living in squalor at New York’s infamous Chelsea Hotel. But their journey takes yet another tragic turn as they face their final curtain and attempt to fulfill their destiny of going out in a blaze of glory!

Presented in 1080p high definition with DTS 5.1 HD Master Audio track, the release will also contain the Featurette ”For the Love of Punk” and the Featurette “Junk Love”.