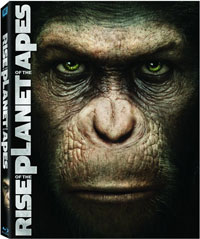 20th Century Fox Home Entertainment has just announced details about the upcoming release of Rise of the Planet of the Apes, which has been scheduled to hit Blu-Ray Disc in December.

James Franco stars as Will Rodman, a neuroscientist living in San Francisco trying to develop a cure for Alzheimer’s disease by testing on chimpanzees, giving them a human level of intelligence. After a test subject’s baby, Caesar, is orphaned, Will decides to raise him at home on his own with his Alzheimer-stricken father (John Lithgow). What begins simply as a continuation of his experiment quickly turns into a problem for Will, as Caesar is taken away from him and forced to live in a primate facility. As Caesar’s intelligence continues to grow, he begins to stake his claim as the leader of his new primate counterparts, which will ultimately lead to the “Rise of the Planet of the Apes.”

The release will feature a 1080p high definition transfer of the movie, along with a DTS 5.1 HD Master Audio track and two Commentary Tracks. The first one will feature Director Rupert Wyatt, while the second one will be host to Writers Rick Jaffa and Amanda Silver.

Also included on the release are the Deleted Scenes ”Alpha Gets Shot,” “Will’s Meeting with Lab Assistants,” “Will Discovers Caesar Has Solved Puzzles,” “Caesar Plays with Bicycle,” “Caesar Questions His Identity,” “Caesar Bites Off Neighbors Finger,” “Will Ignores the Risks of an Airborne Mutated Virus,” “Rodney Gives Caesar a Cookie,” “Rocket Gets Hosed by Dodge,” “Caesar Destroys the Lab and Koba’s Attempted Revenge on Jacobs,” “Caesar Pushes Helicopter” and ”Koba with Shotgun”.

Also among the extras on the release is Pre-vis for The Future and the Script-to-Screen Comparison ”Capturing Caesar”.

Studying the Genius of Andy Serkis is also included, along with Multi-Angle: Rocket Cookie Scene and the Featurettes ”A New Generation of Apes,” “Breaking Motion Capture Boundaries” and ”Breaking New Sound Barriers: The Music and Sound Design of Rise of the Planet of the Apes”.

You will also find various Ape Facts on the disc, along with a Character Concept Art Gallery, Three Theatrical Trailers and a Digital Copy of the movie.