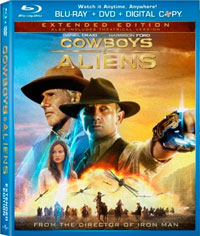 Universal Home Entertainment has just unveiled details about the upcoming release of Cowboys&Aliens, scheduled to arrive on DVD and Blu-Ray Disc this December.

It’s 1873 when gunslinger Jake Lonergan (Daniel Craig) awakens in the Arizona desert with no memory of his past and a mysterious metal shackle encircling his wrist.  Stumbling into the nearby town of Absolution, Lonergan discovers a tightly closed community that takes its orders from the iron-fisted Colonel Woodrow Dolarhyde (Harrison Ford) — and Dolarhyde has a bone to pick with Lonergan. But the colonel’s influence wanes when the desolate city is attacked by monsters that drop from the sky with blinding force and abduct the helpless townsfolk one by one. As Lonergan’s memory slowly returns, he realizes he holds a secret that could give the town a fighting chance against the alien force. With the help of mysterious beauty Ella (Olivia Wilde), he assembles a posse comprised of former opponents: townsfolk, Dolarhyde and his boys, outlaws and Apache warriors. United against a common enemy, they prepare for an epic showdown for survival.

The DVD version features an anamorphic widescreen transfer with Dolby Digital 5.1 audio. It will include a Multi-part Featurette called ”Igniting the Sky”, which is a comprehensive, behind-the-scenes look at the production that invites viewers on set to meet the filmmakers and cast as they create this one-of-a-kind action film. In revealing conversations, Jon Favreau, Steven Spielberg, Ron Howard and Brian Grazer, as well as stars Harrison Ford, Daniel Craig and Olivia Wilde, share their insights about the movie. Also featured are visual-effects powerhouses Legacy Effects and ILM, which join forces once again to push the technological envelope beyond anything ever seen before on screen.

On Blu-Ray Disc, you will find a 1080p high definition transfer with DTS 5.1 HD Master Audio track, as well as the Multi-part Featurette from the DVD. However, it will be expanded even further, adding another three parts to the coverage, including interviews with all key cast and crew members. In addition, the Blu-Ray version features a Commentary Track with director Jon Favreau will be included on the release, as well as various pocketBlu, BD Live and other features, including Universal’s Second Screen which allows viewers to control, interact and explore “Cowboys & Aliens” with groundbreaking new features right on a networked tablet or computer, in synchronization with the movie on the television screen.