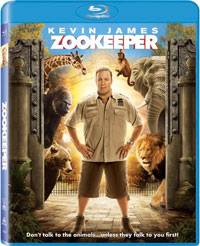 Sony Pictures Home Entertainment has just added the family comedy Zookeeper to their release line-up, allowing the animal world to go on a rampage in October on DVD and Blu-Ray Disc.

All the animals at the Franklin Park Zoo love their kindhearted caretaker, Griffin Keyes (Kevin James). Finding himself more comfortable with a lion than a lady, Griffin decides the only way to get the girl of his dreams is to leave the zoo and find a more glamorous job to win her over. The animals, in a panic, decide to break their time-honored code of silence and reveal their biggest secret: they can talk! To keep Griffin from leaving, they decide to teach him the rules of courtship – animal style!

The DVD version features an anamorphic widescreen transfer of the movie with Dolby Digital 5.1 sound. As extras, the disc will contain a series of Featurettes, such as ”Laughing is Contagious,” ”Bernie The Gorilla,” “Creating the Visual Effects-The Animals,” “Animal Meeting,” “Riding An Ostrich” and ”The Furry Co-Stars”.

The Blu-Ray version arrives n 1080p high definition with DTS 5.1 HD Master audio support. All the Featurettes from the DVD will be included on this version also, along the additional Be The Bear, The Cast of Zookeeper and Behind The Stunts. The disc will be rounded out by a movieIQ feature.