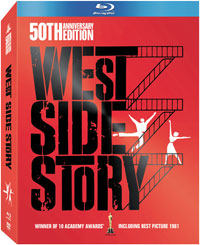 The greatest love story ever told… in the most acclaimed musical of all time… winner of ten Academy Awards, including Best Picture, this electrifying musical sets the ageless tragedy of Romeo and Juliet against a backdrop of gang warfare in 1950’s New York – the Jets and the Sharks. When Jets member Tony (Richard Beymer) falls for Maria (Natalie Wood), the sister of the Sharks leader, it’s more than these two warring gangs can handle. As mounting tensions rise, a battle to the death ensues and innocent blood is shed in a heartbreaking finale.

The release will arrive in a special box set, featuring a 1080p high definition transfer of the movie itself with a brand new, remastered DTS 7.1 HD Master Audio track. While the list of bonus materials has not yet been released, also look for postcard reprints of lobby cards in the packaging, along with a commemorative full-color booklet.

The set will also contain a newly restored DVD version of the movie, as well as a Tribute CD, featuring the film’s beloved soundtrack.