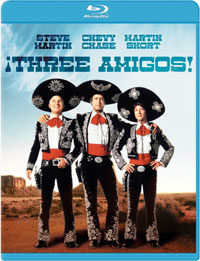 Warner Home Video has just added John Landis’ hilarious comedy Three Amigos to their release line-up, making sure you get something to laugh about in November.

“The Three Amigos” (Steve Martin, Martin Short and Chevy Chase) are a silent screen comedy act who have seen better days. So has a remote Mexican hamlet that is being terrorized by a fierce bandit gang. Finally, in desperation a naïve villager sends the actors a telegram asking for help. Thinking they’re being offered a fortune for a personal appearance, the hapless trio arrive in Mexico, only to discover this time they’re dodging real bullets! Starring Steve Martin, Chevy Chase and Martin Short, and directed by John Landis (Animal House, Trading Places), this uproarious comedy centers on three lovable bumblers who are in way over their heads but come what may, they’ll always remain the Three Amigos!

The release will feature a 1080p high definition transfer with high definition audio,but will not contain any notable extras. On the upside, however, the disc will go on sale for only $14.98 when it arrives in stores on November 11.