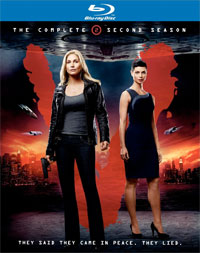 Warner Home Video has announced the release of V: The Complete Second Season to hit Earth in October on both DVD and Blu-Ray Disc.

They seem almost godlike among us. They are the alien Visitors who, led by mysterious queen Anna, base their operations out of 29 motherships hovering over 29 global sites. But why 29? The answer lies in the Vs’ secret plan – just one of the extraordinary revelations in the 10-Episode Season 2 of V. As that astonishing plan draws closer to fulfillment, a resourceful underground unit of resistance fighters called the Fifth Column redoubles its efforts to undermine it. And throughout are the amazing visuals that are hallmarks of the series: looming spaceships, advanced medical technologies and the fear-inducing morphing of Vs into their reptilian forms. Our world… their rules?

The 2-disc DVD version of the release will contain all ten episodes of the second season of the show, and will supplement it with a selection of Deleted Scenes.

On Blu-Ray, the release will arrive on two discs also, containing the ten episodes and Deleted Scenes, but also a number of bonus materials exclusive to the Blu-Ray version. Among them is the featurette The Arc Of The Story: Mining The Human Emotion, in which, under the vision of Scott Rosenbaum, the V writer’s and actors comment on the
journey of the second exciting season of V. Also included is A Visual Masterpiece for The Small Screen, dissecting what it is that makes watching a V episode such an enticing, magical, and downright amazing experience.

The release will also include a Gag Reel to round out the extras.