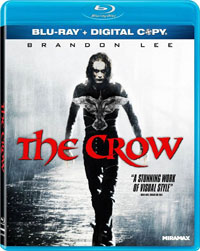 The acclaimed cult movie, directed by Alex Proyas, based on the comic book series and comic strip by James O’Barr, stars Brandon Lee in his final performance as Eric Draven, a poetic guitarist, who is brought back to life by a crow a year after he and his fiancée are murdered on the eve of their wedding. The crow guides him through the land of the living, and leads him to his despicable killers. One by one, Eric gives these thugs a taste of their own medicine. However their leader Top-Dollar (Michael Wincott), a world-class crime lord, will soon learn the legend of the crow and the secret to the vigilante’s invincibility.

The release features a 1080p high definition transfer with DTS 5.1 HD Master Audio. It will also include a Commentary Track with producer Jeff Most and screenwriter John Shirley, as well as a Behind-the-scenes Featurette. Further you will find Deleted Scenes on the disc, plus Storyboards and Photo Galleries. The disc will be rounded out by a Digital Copy of the movie.