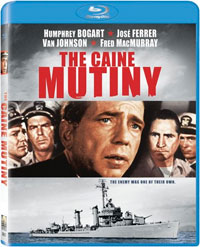 Sony Pictures Home Entertainment has silently and without fanfare slipped a new Blu-Ray Disc onto retail shelves earlier this month – The Caine Mutiny.

Nominated for seven Academy Awards® in 1954, including Best Picture and Best Actor, “The Caine Mutiny” is a classic film about the unstable Captain Queeg (Humphrey Bogart) and his tumultuous command of an old minesweeper and her weary crew. On the high seas during the dramatic battles of World War II, Queeg’s by-the-book approach pushes his crew and his popular second-in-command, Lt. Maryk (Van Johnson), to the breaking point. After a series of questionable orders, Maryk confronts Queeg when he orders the ship directly into the path of a deadly typhoon. Maryk invokes naval code and relieves Queeg of his command, forcing the crew to mutiny. Once safely back in port, Maryk is court-martialed for treason, setting off a tense trial that exposes the true state of Queeg’s mind. Nominated for Best Actor, Humphrey Bogart gives a searing performance as he is systematically broken down in this classic tale of military conduct in a time of war.

The release features a 1080p high definition transfer with DTS 5.1 HD Master Audio. As extras, the Featurette ”Behind The Caine Mutiny” is included on the disc, along with a Commentary Track by Richard Pena and Ken Bowser.