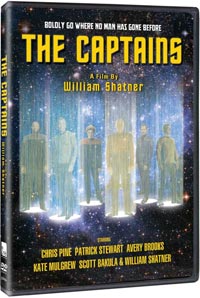 Entertainment One will give you a rare, personal glimpse at The Captains of the Star Trek universe, bringing the feature-length documentary written and directed by William Shatner to DVD in October.

Following one of the most engaging media personalities of our time,  “The Captains” chronicles Shatner’s quest to answer one burning question: why, in spite of his myriad stage, screen, and television credits, as well as his numerous Emmys and Golden Globe Awards, does one role in his career loom so large that it nearly eclipses all others?  To find the answer, Shatner enlists the help of the elite group of actors who have also assumed the mantle of Starship Captain.  In the process, coupling their own unique stories with compelling insights, the five Captains give Shatner a better understanding of his own life and solve this “mystery” once and for all.  Featuring vintage Star Trek footage and in-depth interviews with actors Patrick Stewart (Captain Jean-Luc Picard), Kate Mulgrew (Captain Kathryn Janeway), Avery Brooks (Captain Benjamin Sisko), Scott Bakula (Captain Jonathan Archer), and Chris Pine (Captain James T. Kirk, Star Trek), “The Captains” was shot on location in Toronto, London, New York, Princeton and Los Angeles, where Shatner could capture his fellow Captains in their home environments.  The acclaimed HD film, which originally premiered as part of Epix’s “Shatnerpalooza” this summer, exposes the Captains in all their earthly humanity, offering a rare and candid glimpse into the inner sanctum of each actor and their time at the helm of the Starship Enterprise.

“The Captains” will beam to your living room to tell you their stories on October 4 for $19.98.