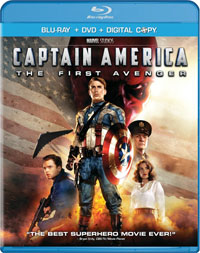 Paramount Home Entertainment has added Captain America to their release line-up, scheduling a DVD and Blu-Ray Disc version for October.

“Captain America: The First Avenger” focuses on the early days of the Marvel Universe when Steve Rogers (Chris Evans) volunteers to participate in an experimental program that turns him into the Super Soldier known as Captain America. As Captain America, Rogers joins forces with Bucky Barnes (Sebastian Stan) and Peggy Carter (Hayley Atwell) to fight the evil HYDRA organization, led by the villainous Red Skull (Hugo Weaving).

The DVD version of the film will be very straight-forward, featuring only the movie and a Digital copy.

The Blu-Ray version on the other hand is much more promising. Featuring a 1080p high definition transfer of the film with DTS 7.1 HD Master Audio, the release will also include a host o bonus materials, such as a Commentary Track by director Joe Johnston, director of photography Shelly Johnson and editor Jeff Ford. Also included is the Marvel One-Shot called ”A Funny Thing Happened on the Way to Thor’s Hammer”.

The release also contains a number of Featurettes, covering aspects suc has ”Outfitting a Hero,” “Howling Commandos,” “Heightened Technology,” “The Transformation,” “ Behind the Skull,” “Captain America Origins” and ”The Assembly Begins”.

To round out the release, you will find Deleted Scenes with commentary by director Joe Johnston, director of photography Shelly Johnson and editor Jeff Ford on the disc also, as well as Trailers. The DVD version of the film and a Digital Copy complete the Blu-Ray package.

In addition a 3D Blu-Ray Disc version will be sold, containing the 2D version of the movie with all of the above Blu-Ray features, along with a third disc that offers up a 3D presentation of the movie.