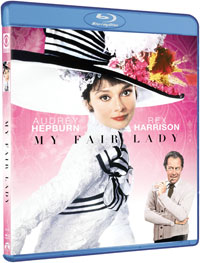 Paramount Home Entertainment has just announced a Blu-Ray Disc version of My Fair Lady, scheduling it for release in November.

In this beloved adaptation of the Broadway stage hit, Audrey Hepburn plays a sassy, working class London street vendor, who an arrogant professor (Rex Harrison) attempts to turn into a sophisticated lady through schooling. But when the humble flower girl blossoms into the toast of London’s elite, her teacher may have a lesson or two to learn himself.

The release will feature a 1080p high definition transfer, complete with a DTS 7.1 HD Master Audio track. In addition, the disc will contain a number of bonus materials, such as a Commentary Track, as well as Alternate Audrey Hepburn Vocals, the original Vintage 1963/4 Production Featurettes along with Comments on a Lady and a Rex Harrison Radio Interview. The release is rounded out by a Gallery of Posters and Lobby Cards and the movi’es Theatrical Trailer.