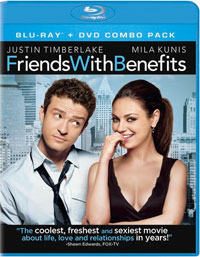 Sony Pictures Home Entertainment has added Friends With Benefits to their roster, scheduling the film for release on DVD and Blu-Ray Disc in December.

Dylan (Justin Timberlake) is done with relationships. Jamie (Mila Kunis) decides to stop buying into the Hollywood clichés of true love. When the two become friends they decide to try something new and take advantage of their mutual attraction – but without any emotional attachment. Physical pleasure without the entanglements. Sounds easy enough for two logical adults, right? Not so much. They soon realize romantic comedy stereotypes might exist for a reason.

On DVD you will find a widescreen presentation of the movie with Dolby Digital 51. audio, along with a Commentary Track with Writer/Director Will Gluck, Justin Timberlake and Mila Kunis. Also included on this release is a selection of Deleted Scenes and a few Outtakes.

On Blu-Ray Disc, the film is presented in a 1080p high definition transfer with DTS 5.1 HD Master Audio. Naturally, you will find the same Commentary Track, Deleted Scenes and Outtakes on the release, as on the DVD version, but on this version you will further be treated to a Pop-Up Trivia Track and the Featurettes ”On Set With Friends With Benefits” and ”In A Flash: Choreographing A Mob”.