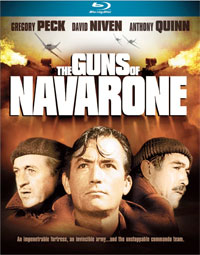 Sony Pictures Home Entertainment has just announced a Blu-Ray version of The Guns of Navarone, scheduled for release in October.

Gregory Peck, Anthony Quinn and David Niven are Allied saboteurs assigned an impossible mission: infiltrate an impregnable Nazi-held island and destroy the two enormous long-range field guns that prevent the rescue of 2,000 trapped British soldiers. Blacklisted screenwriter Carl Foreman (High Noon,The Bridge on the River Kwai) was determined to re-establish both his name and credibility after spending most of the 50’s working in anonymity. To accomplish this, he decided to bring Alistair MacLean’s best-selling novel, “The Guns of Navarone,” to the screen. Supported by an all-star cast and produced on a grand scale, the film was an enormous success, receiving seven 1961 Academy Award(r) nominations (including Best Picture) and winning for Best Special Effects. Although Foreman achieved his goal, it was MacLean who would wind up the true beneficiary; his novels became the source for many high adventure screen epics, including “Ice Station Zebra” and “Where Eagles Dare.”

However, it is “The guns of Navarone” that remains not only the best of the MacLean adaptations, but one of the greatest action/adventure spectacles ever produced.

Featuring a 1080p high definiti on transfer with a DTS 5.1 HD Master Audio track, the release will be chock-full with bonus materials. Starting with a Commentary Track by Film Historian Stephen J. Rubin and a second Commentary by Director J. Lee Thompson, the release also includes the original Roadshow Intermission, a Message from Carl Foreman and a Narration-free Prologue.

No less than Fifteen Featurettes will be included on the release, covering aspects such as The Greek Resistance, The Old School Wizardry of The Guns of Navarone, World War II and the Greek Islands, The Real World of Guns of Navarone, The Navarone Effect, Military Fact or Fiction, Forging the Guns of Navarone: Notes from the Set, Ironic Epic of Heroism, the movie’s Restoration and Score, Memories of Navarone Retrospective, Great Guns, No Visitors, Honeymoon on Rhodes and Two Girls On The Town.