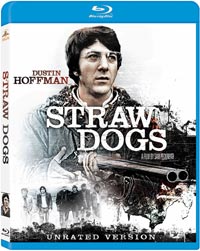 Sam Peckinpah’s gritty and controversial thriller Straw Dogs will finally make it to high definition, when MGM Home Entertainment will release a Blu-Ray version of the film in September.

To escape the Vietnam-era chaos in the U.S., American mathematician David Sumner (Dustin Hoffman) moves with his British wife Amy (Susan George) to an isolated English village. Their presence provokes antagonism among the village’s men. Escalating from routine bullying to vicious brutality, David finds his pacifist self being backed into a corner and responds in the violent and gruesome manner he abhors.

The release will feature a 1080p high definition transfer along with an all-new DTS 5.1 HD Master Audio track. In addition, the disc will feature the Original Theatrical Trailer and Three Original Television Spots. Sadly, no other bonus materials will be included.