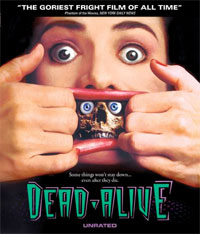 A mama’s boy who has the unfortunate task of looking after his aging, evil mother, Lionel (Timothy Balme) believes his dreams have come true when he meets the love of his life. While out to sabotage her son’s happiness, his Mum (Elizabeth Moody) is accidentally bitten by a Sumatran rat-monkey, which turns her into a flesh-eating zombie. Lionel is forced to put his relationship on hold to stop his undead mother, and the rest of the town that she’s infected before it’s too late.

Sadly, no bonus materials have been announced for the release, but expect “Dead Alive” to hit stores on October 4 for only $19.98.