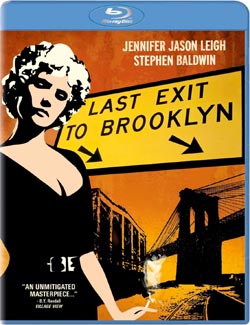 Summit Entertainment has just added Last Exit to Brooklyn to their release line-up, bringing the cult movie to Blu-Ray Disc in October.

Hailed as an uncompromising look at life on the dark side, “Last Exit to Brooklyn” follows a gang of young hoodlums, a down-and-out prostitute, an alcoholic father, and a low-level union official as they attempt to survive in the harsh underbelly of lower class 1950s Brooklyn. Adapted from the cult classic best-selling novel by Hubert Selby Jr., The New York Times calls “Last Exit to Brooklyn” “harrowing” yet “savagely beautiful.”

The release features a 1080p high definition transfer of the film with a DTS HD Master Audio track. As extras you will find a Commentary Track by Director Uli Edel on the disc, along with a Making-Of Featurette.